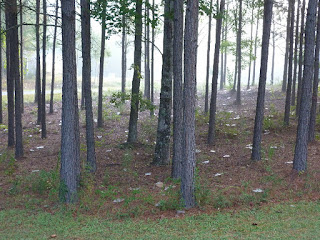 Last Monday we were in Montgomery and stayed over night and had a policy development meeting for the Alabama Farmers Federation but before we left home on Monday morning I took a picture that said " Fall is Here".  Do you know how many spiders live in the forest?  The dew shows all their webs.

Then on Thursday drove to Tuscaloosa for the State Treasure Forest Conference.  On Thursday night we had a board meeting, on Friday we had seminars on forest management, then on Saturday we had a tour on the McGiffert Property.  They have a high fence around about 1700 acres.  They said to keep things out.  There are three brothers that own the property and one is into quail hunting, releasing about 3500 quail a year.  Another brother is into duck hunting and they have a 7HP pump to flood the field they plant food for ducks.  The other brother is the deer hunting brother.  They only have Alabama deer in their fence that were native to the property.  They feed tons of high protein feed to the deer each year.  The brothers also have a big dove hunt each year where they have added some power lines for the doves and they do some turkey hunting on the property.  The brothers are engineers and do public water systems.  They had an interesting story to tell. 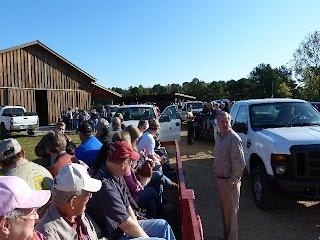 Tour about to began on the property. 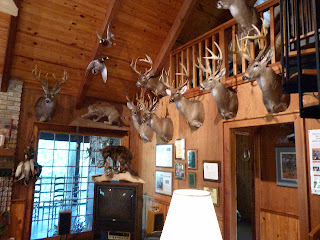 Some of the deer in their camp house. 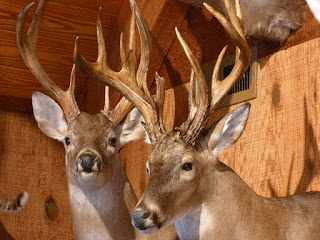 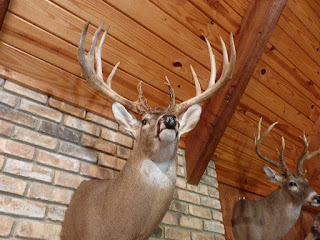 This deer was found dead on the property.  It scored in the 180's. 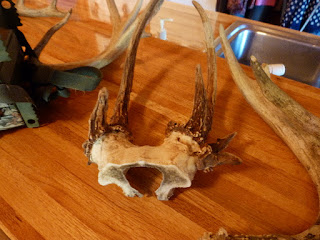 This deer was an old deer that they had taken out, probably about eight years old.  The base was huge but it would have looked like a spike in the woods.  They had pictures of it and knew it need to be removed.  They said they had about 300 deer on their property. 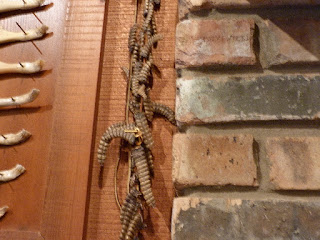 They had rattle snakes too! 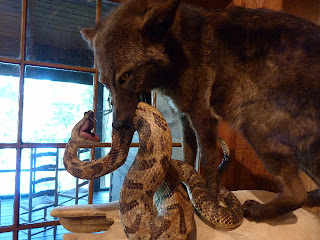 This was one of their mounts in the room.
You can learn so much from other people.  This is why we belong to forestry groups and spend money on these trips.  The people you meet are always nice and don't mind sharing what they do to improve their forestland.
Let me know if you are interested in being a member of any of these groups and learn more about management of your property.
Posted by Dewberry Lands, LLC at 1:00 PM