We have just gotten out from under drought conditions in our part of the state.  Wildlife food plots have not been planted and bush hogging has to be completed.  It has been too dry for seed to germinate and the threat of wildfire from bush hogging was too great to chance it.  Now the rain is coming and there is much to do.
We have had several meetings but now that is behind us we hope to get some late seed in the ground and start bush hogging the roads and fire breaks.  We were not able to get our summer burn in because it was too dry. The middle of October we were able to attend the 30th anniversary of the Southeastern Farmer Of The Year in Valdosta, GA then the next day attend the Ag EXPO in Moultrie, GA.  It was good to see old friends there. 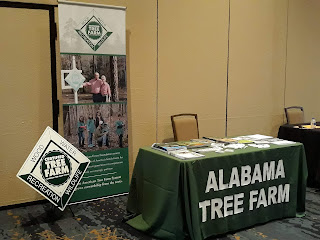 We attended the Alabama Landowner Conference in Prattville, where we had meetings with the Alabama Treasure Forest Association Board and the Alabama State Tree Farm Committee.  We went on a tour of two forest operations highlighting their use of pine straw and wildlife resources.
My grandchildren, wife, and I were featured on the new State Tree Farm banner which was an honor for us.
Posted by Dewberry Lands, LLC at 10:21 AM No comments: