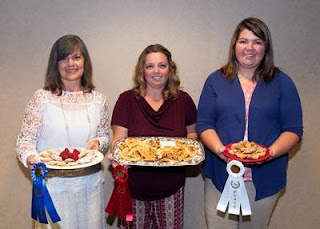 Winners in the 40th Annual Heritage Cooking Contest are, from left, first place, Felicia Dewberry of Clay County; second place, Angela Vollmer of Lee County; and third place, Brandy Abel of Blount County.
The Southern tradition of good food and fellowship was overflowing at the 40th Annual Alabama Farmers Federation Heritage Cooking Contest today in Montgomery.
Sponsored by the Federation Women’s Leadership Division, 29 of the top cooks in the state carried on the custom of fried pies, or tarts, profiling food grown in Alabama.
Clay County’s Felicia Dewberry won first place and $150 for her Fried Strawberry Pies. Angela Vollmer of Lee County won second place and $100 for her Southern Pecan Fried Pies, and Blount County’s Brandy Abel won third place and $50 for her Mini Fried Pecan Pies.
“I was shocked when they called my name as the winner,” Dewberry said with a smile, adding that she chose strawberries as a main ingredient for her dish because of a special family connection.
“I think fried pies are a favorite Southern treat, and I grew up eating apple and peach pies,” she said. “My daughter started raising strawberries a couple of years ago, and I thought it would be neat to use something she grows. The ones in my recipe today are frozen, but fresh would be even better.”
Dewberry said she and her husband, Lamar, have been involved with the Federation for nearly 20 years, and she’s been part of the women’s program for almost that long. They grow timber on their farm near Lineville and manage their property for wildlife as well.
“We believe in the Farmers Federation and what it does to promote agriculture,” Dewberry said. “Agriculture is a big part of what our country is, and it’s an important part of our history.” September 3, 2015 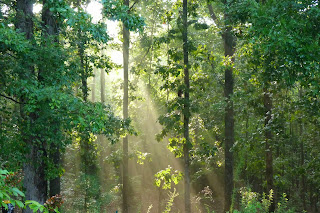 This picture, made in our backyard last fall, has been named the runner-up in The American Tree Farm Photography Contest 2013.  The winner was from Michigan, it was a great picture.  Go to the American Tree Farm Facebook page to see the winners.  This was the email wordage.

Congratulations!!!  Your photo, Steam in Forest, was selected as the Category 1 runner-up of the 2013 Tree Farm Photo Contest, Sponsored by STIHL, Inc.

Be on the look-out for your photo on our website, our Facebook page, and in future ATFS publications.  Also, keep your eyes on your mailbox for a $250 STIHL product certificate, which should arrive in the next 4-6 weeks.

Thank you again for participating in this year’s photo contest, and congratulations! 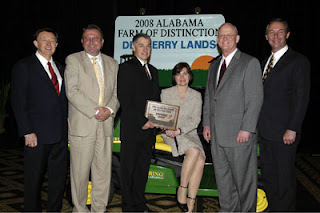 Receiving the Southern Region Award for "Tree Farm of the Year" 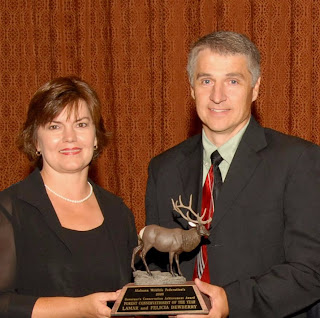 Receiving the Governor's "Forest Conservationist of the Year Award" 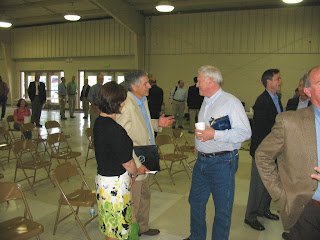 Speaking to the Chairman of the House Agriculture Committee, Colin Petterson of Minnesota 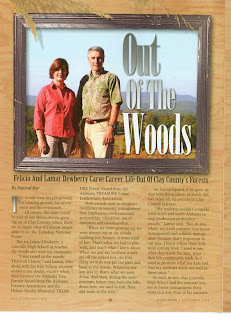 We have recieved several awards and recognitions for our management of DewberryLands.  Our greatest award was the "2008 Farm of Distinction".  Other awards include the " Treasure Forest Helene Mosley Award", 2006 "Alabama Tree Farm of the Year" and a Southern Regional Finalist, Governor's "Forest Conservationist of the Year", and Wild Turkey Woodland Recognition.
I was asked to testify before the Congressional Agriculture Committee and we have had several articles published in forest and agricultural magazines. 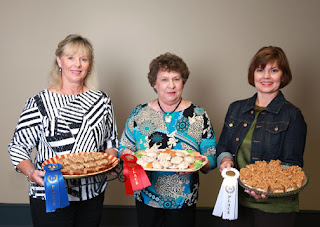 Lisa (Felicia) placing third in the Farmers Federation State Cooking Contest out of 34 other county winners.  Go to http://www.alfafarmers.org/headlines/headline.phtml?id=6072 for more information.