Saturday was such a beautiful day!  Felicia and I planted a few Baldcypress trees in a damp area where we have just had Longleaf Pines planted.  We also planted Beauty Berry shrubs at the cabin and along the railroad bed.  We checked out the firelanes that we are in the process of installing to protect the young trees and other lanes are for the prescrib burn we hope to complete soon.  We also planted fescue seed in the railroad track bed where we are developing a walking trail. 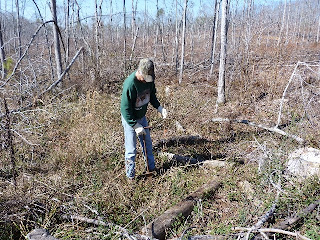 (Below)  The Ryegrass is really turning green and growing at Grandmother's Park, named for Felicia.  The turkey are enjoying this grass.  It was so beautiful and peaceful down here Saturday.  We have big plans for this area.  We hope there will be more to come!  The stream was flowing so clear and played it's music across the rocks. 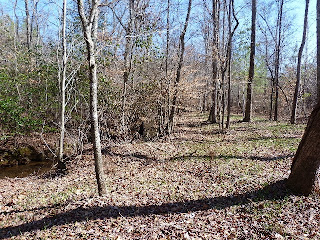 (Below) This is where the railroad crossed the stream in the early 1900's.  The bridge has long been gone but we have plans to build a new one that will be for people to cross on the trail, not the train.  We found a 5' piece of rail, which is over 100 years old, while clearing for the trail. 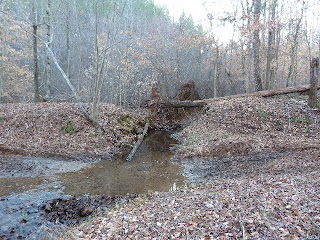 Below is a view looking down the old track bed where the trail is being developed. 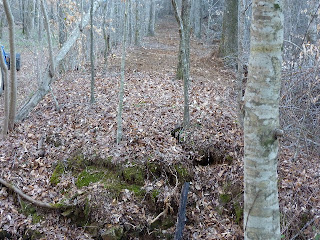 This is a picture of the train on that railroad . 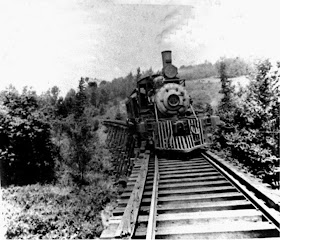 Posted by Dewberry Lands, LLC at 11:46 AM No comments:

Last week attended a TREASURE forest state board meeting in Tuscaloosa.  Plans were made for programs the remainder of the year and the discussion of FSC certification.  I don't really know where that is going.
Yesterday was a busy day in forest management.  Started out yesterday morning with a meeting with a NRCS tech person to count and check longleaf tree planting.  All was good on that.  Four plots were sampled on the 40 acres.  After lunch I marked a line where firelanes are to be put in.  This was tough because the area was very hilly, the pines were thick and briers were unused.  This took the rest of the afternoon.  Today I met with the Forestry Commission about the lanes to be put in and about burning the 125 acres.  Tomorrow is a Forestry Planning Committee meeting to discuss the wild hog meeting next week.
Posted by Dewberry Lands, LLC at 12:18 PM No comments: 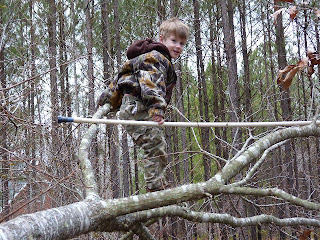 James and I got out today and cut firewood.  Weather is saying snow next two or three days.  Every boy needs a day of tree climbing while cutting wood!  We also plant tomato and lettus seed.  James wanted the seed to start growing soon but he understood it would take a little while.  He is so much fun and full of life!
Posted by Dewberry Lands, LLC at 4:20 PM No comments:

The meeting I attended in Tuesday was the Wildlife Committee meeting with the Alabama Farmers Federation on which I am a committee member.  The county wildlife committee chairmen and vice chairmen were also invited.  The meeting was at the .
Our first speaker was the assistant chief law enforcement for the Alabama Fish and Game Department, he spoke on dove hunting.  He pretty much said until they heard back from the Feds on the ruling on the dove field the Alabama Department of Conservation sponsored for the youth, they don’t really know.  What happened was they had a field for the youth prepared by the Department of Conservation and and the feds came in and said they could not shoot it was baited.   They were so embarrassed and were shocked.  They had to turn the youth away!  The Chief Law Enforcement for was there.
has appealed this and it is being investigated but they just don’t know.
The second speaker was a wildlife biologist from the Barbour County Management Area.  He cited three studies on coyote predation.  Some studies showed that coyotes were taking 65-85% of the fawns.  Another study showed it took 28 does where predators were not controlled to produce what 3 does produced where predators were controlled.
Coyotes were the main cause of fawn mortality but habitat could help in that matter.  Fawns need tall grasses like what you would find in a two+ year old cutover.  Another thing noted was where deer are fed; coyotes would stalk that area because they know fawns would be there. That is why so many coyotes are seen on game cameras near corn.
Posted by Dewberry Lands, LLC at 12:01 PM No comments: