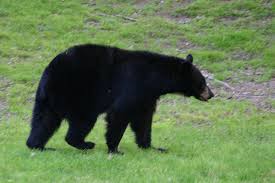 Last week we were at Cave's Cove and the bears were really out.  It is exciting to me that we are beginning to have more and more sightings of bears in our area.  Just today a bear was sighted in Heflin about 20- 25 miles away.

The Alabama Game and Fish website recently had an article about bears and the bear recently seen in Alexandria, about 40 miles away.  Attached is the article: http://www.outdooralabama.com/young-black-bear-makes-appearance-alexandria-ala
The article shows sightings in Alabama since 2010.  In 2014, I sent a video to them of the bear we had on the game camera on our property.  I was not sure it was a bear but I knew it looked like it, for what I could tell.  After seeing the bears this weekend and watching them walk I then decided it was a bear. The Game and Fish division thought it was a bear too after they saw it because they have it marked in Clay County in 2014.  If you look back at my 2014 post in February you can see that video.
Posted by Dewberry Lands, LLC at 5:10 PM