The other day we had a young peregrine falcon visit us at Ekun Duts Ke Lodge. 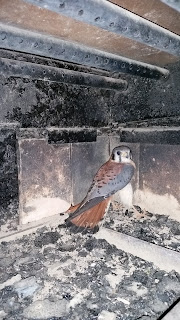 It came down the chimney into the wood heater.  The grandchildren heard a commotion in the heater and went over to check it out. At first they though it was an owl but when we opened the door of the wood heater we saw it was a falcon.
Next we had to figure out how to get it out and set it free.  I put on gloves and opened the door to reach for the falcon and it quickly flew past me and out into the lodge it went. The granddaughters screamed as it flew by.  It flew upstairs to a window where it stayed until I could go up and there it allowed me to catch it.  All the grandchildren had to pet it before we then took the falcon out to be set free.
The video below was made by my grandson as we set the falcon free.  It flew off into the big sky, happy to be back in his world.