Sunday, Monday and Tuesday we were at the annual meeting of the Alabama Farmers Federation.  It was one of the best annual meetings I have been to.  On Sunday night our Congressman, Mike Rogers, was presented the Service to Agriculture Award.  He saw us after the meeting and called us over, we got to congratulate him for his award.  He has always been a friend to Agriculture in Alabama.
The program and the exhibitors at the meeting were top notch.  The business meeting was interesting with lots of debate.
At the end of the business session Mr. Jerry Newby announced he would not seek re-election.  He has been president of the organization since I became a county board member.  He will be missed but that opened up the position and the competition has begun. 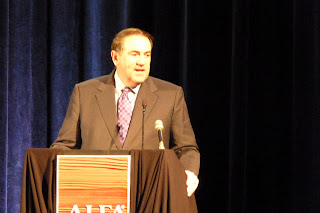 The highlight of the meeting was Gov. Mike Huckabee speaking.  He did a great job!  One comment he made was if the rest of the Nation voted like the good people of Alabama, then Obama would not be our President today.  He talked about how we as a nation to remain strong had to be able to grow our own food, produce our own fuel and fight our own wars....So true! 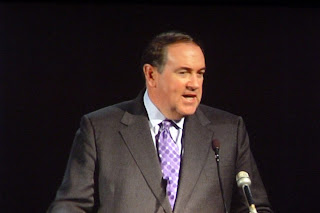 Next year the Federation takes on another first since I have been involved, we will be meeting in Montgomery.  We will miss Mobile but that will cut down on our travel time.
On the way home we stopped in Montgomery at Nelson Paint and got paint needed for painting boundary lines and paint for marking timber to be thinned.
Posted by Dewberry Lands, LLC at 8:50 PM