Come and gone for another year.  Weather was too hot up in the day to hunt but it was good early.  On Wednesday James and I went hunting.  He wanted to go.  As we sat in the Spaceship, a stand made from an old feed bin that Jay had made, James looked for deer.  It is a good stand for hunters that can't be real still, if you know what I mean.  We watched a hawk try to catch a bird, then it swept over and over the field looking for others.  We looked at all the mountains around us and part of that time we played with Legos.  James was seriously looking for deer. 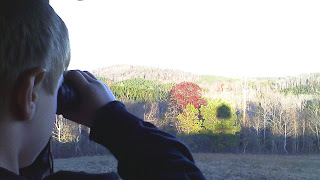 At about 4:40 pm a deer came out at the edge of the field.  James said, "Shoot it" but I told him I had to look at it and when I did it was a young buck.  I told him that it was too small and it would grow and someday he might get to take it.  He got the binoculars and watched it until it left the field.
The next morning I took out one of our predators.  There were two and one got away from me. 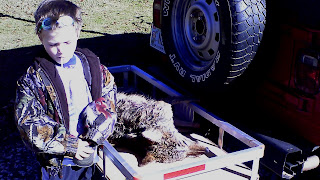 I had to bring it home so James could see it.  He was impressed by it.  Selah liked seeing the blood.
I enjoyed hunting with Nathan and Abby.  Russell, Doug and Pawpaw hunted about ever morning also.  Nathan saw several does and a six pointer.  We just could not see any big deer, that will come at the end of December and into January.
One morning we spent more time tearing out beaver dams than hunting.  It was so good being out in the woods with them.
Posted by Dewberry Lands, LLC at 11:24 AM