Twenty-five years ago on my first trip to Kansas City, Missouri and my first FFA Convention I was leading FFA members as their advisor.  It was all new to me.  We had won the State Forestry contest and one of the team members had won the state and regional FFA Forestry Proficiency Award.  He was one of the seniors on the team along with another senior and two freshmen and he had to decide whether to remain on the team or compete in his individual award area.  Only three could compete nationally at that time.  I encouraged him to try to win the Forestry Proficiency Award because of all the hard work he had completed on his property and that is what he did.  He won the National Award in Forest Management and was able to tour Europe as part of his award.
At the same time as he was going through interviews the team was competing against 42 other states.  These young men had worked hard preparing from June to November for the contest reading and studying everything they could about forestry.  Their work paid off for them!  They also won the National FFA Forestry Contest, a first for Alabama.  This was such an honor for me and a great learning experience! 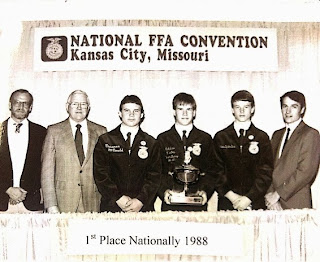