Another Christmas Come and Gone


It has been a busy time trying to make all the Christmas family gatherings and a New Year is looked forward to.  Since last post we have been able to work some hunting in and arrangements are being made to reforest the area in 2014 where we completed the harvest cut.

This was one of the strangest things I have ever seen at sunrise over Dewberry Lands. It was cloudy except for the horizon on the eastern sky.  The sun came up shining under the clouds and at the same time there was light rain in the area.  The sun and the light rain made a rainbow that was vertical like none I had ever seen before and never a sunrise rainbow. 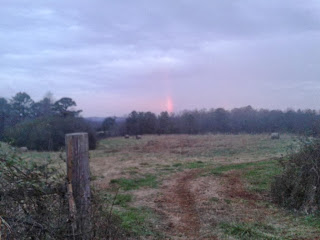 Just before dark my grandson and I came out of the woods from hunting on the property where we had timber cut, James found a stump cut off up high and he had to climb up on it.  He wanted his picture made.  He was a forest statue. 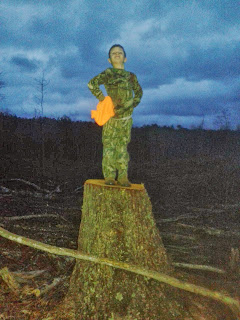 On another day we were hunting and he saw a spike coming out in the field where we were sitting in a stand. He pointed out the deer to me as came out in the field.  It kept coming until it was with in ten steps of us.  This was the closest a deer had been to him out in the wild.  I was able to get a picture of it as it came to us. 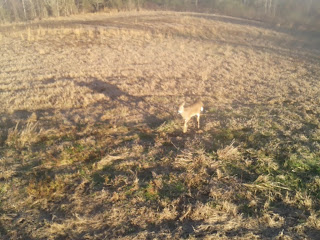 Nathan got his second buck Christmas Eve.  This was his second eight pointer, so for the remainder of the season he will have to be very selective of the last one he can harvest. There is a three buck limit in Alabama. 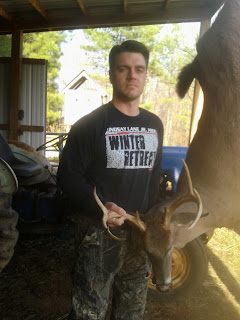