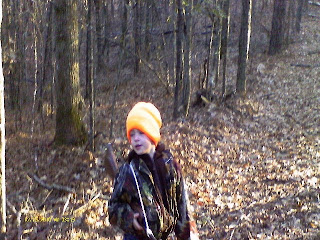 James enjoyed his hunt but we didn't see an "eight pointer" like we were looking for.  He was so glad Abby came to hunt so he could go with her.  He was hoping Jay could be here so he could see him.  He really loves them.
Nathan had a friend, Scott,  from Kentucky visiting with us.  He had a big buck dodge his bullet Friday morning, Nathan saw an eight pointer but he said it was just smaller than what he wanted to shoot.  Abby saw a coyote but couldn't get a shot at it.  We saw several does.  Saturday morning we saw several does again and Nathan saw another small buck. We had a good time in the woods!  Scott, being from Kentucky, saw his first armodillo.  We shot one so he could see how ugly they are.
The treestand where the deer was missed has gotten hot.  Saturday evening Doug got in it but he shot two armodillos so he left and went to another stand.  Sometime soon after that Pawpaw showed up and got in it.  He didn't know Doug had been down there shooting.  He was disappointed.  It will probably be a while before that deer will be in that field again.
Posted by Dewberry Lands, LLC at 7:27 PM