Grandchildren on the Land

We had James, Selah and Eden till Sunday and they had to go back to Kentucky with their mom and dad, then early Monday morning we got Mattie because her mom and dad had visitors there about the farm.  The  most exciting thing we did on the land while she was here was feed the fish in the pond.  This was the first time she had gotten to do this. 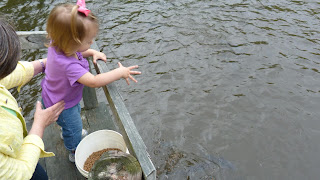 She tried to count them, two, two, three. 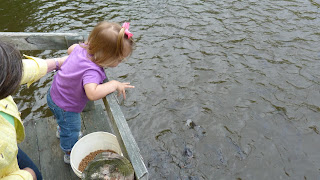 We took her home Thursday night and left there the next morning going to Tuscaloosa for two days for the annual Alabama Forest Landowners Association meeting.  On Friday we had a special tour of Moundville which is always interesting. 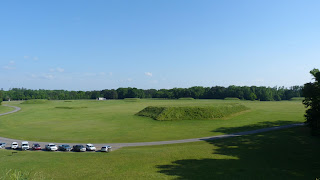 The museum is now opened and redone.  I wish James could have been with us because we always talk about the Indians(Native Americans).  I want to take him someday.  The first time I went I was impressed.  The remains were on display in the museum which was built over a burial mound.  The remains have since been removed and the Indians(Native Americans) taken possession of them and had them removed from display.
Moundville is such an amazing place. 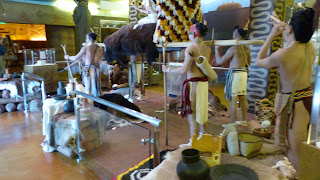 We had supper there and it was suppose to be native food, some was and some was not but I could get use to eating the buffalo meat.
The next day we were on campus for seminars.  Some were really interesting such as the architect that does cabin plans, the apps for smart phones, and mapping.
It was good to get back home.  Tomorrow I have to meet with drillers for the cell tower evaluating the soil.  This is the third test including electricity in soil movement for grounding and the civil engineer that reviewed and recorded information about the site.
Posted by Dewberry Lands, LLC at 4:38 PM